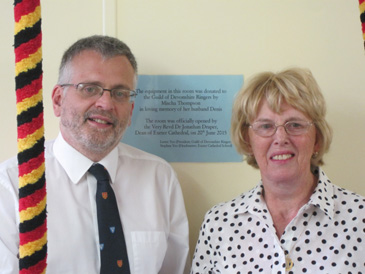 The Guild is fortunate to own a set of ten Saxilby Simulators (formerly located in Okehampton) which were donated by Mischa Thompson in memory of her husband Denis - hence the name Denmisch. They are installed in a building at Exeter Cathedral School which was converted specially to take them. They were officially opened by the Dean of Exeter Cathedral in June 2015. In March 2016 the installation won The Sarah Beacham School Group Award organised by Association of Ringing Teachers.

Each simulator weighs about 50Kg and handles like a normal (though rather light) tower bell, complete with stay. In themselves they make no sound but sensors on each one are connected to a computer with speakers in the ringing chamber which makes suitable sounds so that normal ringing is possible although nothing can be heard outside. In addition the computer (which runs the Abel program) can be used to provide the sounds of some of the bells while the others are rung in the normal way, both to simple rounds up to complicated methods on any number of bells. The sounds used can be varied from a standard bell sound, through sampled sounds from other local towers (including the Cathedral) to other sounds which are not normally associated with bells (the pupils particulally like the sheep bleating in tune!).

The ring is used weekly by the bellringing club from the Cathedral School and is available for use outside of school hours for other groups. This includes all evenings and weekends even during term time.

For further information, or to book them for a ring, please contact Ian Campbell. 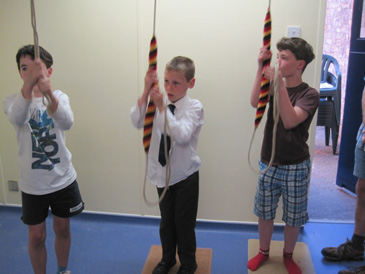 Denmisch Bells and some school pupils trying them out.

We have 9 guests and no members online